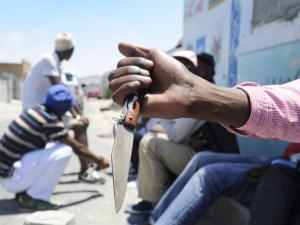 Cape Town – Time is running out to stop Khayelitsha’s “school” or “youth” gangs from becoming structured crime networks, which could make policing the already violence-riddled township even more demanding, the head of the Western Cape’s anti-gang operation warned.

Major-General Jeremy Vearey, head of Operation Combat, said the gangs – the Vuras and the Vatos – were in the same “transition stage” as the now-notorious Cape Flats gangs such as the Hard Livings and Americans in the 1980s.

“Our strategy is to prevent them becoming organised criminals,” he told Weekend Argus this week.

Archbishop Emeritus Desmond Tutu, in an essay penned with his daughter Rev Mpho Tutu and which appeared in Weekend Argus on Saturday, warned against the spread of street gangs, saying: “The scourge of gangsterism has spread from coloured communities to neighbouring, dysfunctional – predominantly African – communities.”

Authorities are now also wary of the Khayelitsha youth gangs falling under the influence and control of the powerful Numbers prison gangs, the 26s, 27s and 28s.

Vearey said there was a danger that school gang members, returning from prison, were bringing with them the code, structure, discipline and contacts of the feared Numbers gangs, and trying to impose them on the school gangs.

“Nothing we do in the criminal justice system has any deterrent effect once the Number has taken a hold on a person’s mind,” he warned.

The Numbers gangs are prevalent throughout the South African prison system. Although members are predominantly coloured today, their history is as much African – with a unique mythology, code and hierarchy.

In recent times the Numbers gangs have moved beyond the confines of the prison system to build affiliations with different predominantly coloured street gangs.

For Vearey, there is a real fear that should the Numbers gangs get their tentacles into Khayelitsha’s youth gangs, they will “transition” into structured criminal networks.

This could lead to an explosion of gang violence in the Western Cape’s largest township.

Vearey warned: “The basic root… is already there. You just need to take it further.”

Since Khayelitsha was founded in the mid-1980s, groups of school children have banded together for protection from older criminals. But press reports of its two major “school” gangs only emerged in 2009, when police in nearby Delft first reported school children calling themselves “Vatos Locos”, a name apparently taken from a gang in the 1993 film Blood In Blood Out.

Since then, reports of fights, stabbings, killings and intimidation have multiplied. But few, if any reports have noted guns being used. This is in contrast to established gangs in Manenberg and Elsies River, where shootings are common.

The main rivals of the Vatos are the Vuras, named after the Volkswagen Golf VR6 that was developed in the 1980s. Some Vura graffiti is tagged “VR6”.

At the Khayelitsha Commission of Inquiry, residents and police have testified how the two gangs staged set street battles last year, which some residents call “gurans”.

The commission heard that on Friday afternoons, at locations such as Pama Road, the gangs fought with spades, pangas, axes, stones and knives.

According to police, the Vatos and the Vuras now hold sway in different areas of the township – the Vatos in D-section up to Litha Park, and the Vuras in Site B, including C-Section. Thirteen schools are affected by these gangs.

Vearey said fights over turf were, in principle, the same as fights by established gangs over drug-dealing territory, and that he feared the gangs could wake up to the financial potential of using this “turf” to start dealing drugs and running shebeens.

In Green Park informal settlement, between Mfuleni and Delft on the edge of the Driftsands Nature Reserve, Vura gang graffiti has been sprayed on toilets.

Community leader Raymond Mtati said last week that local children who attend school in Delft had been influenced by the gangs there.

Mtati added that some Green Park youth who went to school in Delft had started using a muti called amakhubalo to make them strong in fights.

He said it made some of the boys behave like “zombies”.

Vearey said that during visits to Pollsmoor prison, it had become evident that members of the Vatos and Vuras were joining the notorious prison Numbers gangs.

“You can go into Pollsmoor as a young housebreaker and end up being absorbed into the 28s or 26s,” he said. “That will grow you from a small fry into a person of authority.

“Once you leave that prison you will join a network outside, where that very identity of the 26s, 27s and 28s is perpetuated,” Vearey said.

“Until about two months ago there was a conflict between the gangs in Khayelitsha. This conflict was between older leaders, who had gone to prison and were now Numbers people, and young members. The older members wanted to assert (the Numbers) type of leadership, and the gangs even ended up killing each other.”

But Vearey said it was not yet too late to reverse the tide.

“We are still able to impact their development through community mobilisation and targeted policing against certain gang leaders, before it congeals and solidifies into a structure with its own shebeens, drug outlets and organised networks.”

Vearey said that of these, community mobilisation – which he described as a “collective form of activism that replaces the peerage of gangs” – was the most important.

He said the community had to “counter-mobilise” by regaining control of open spaces such as sports fields and parks where gangs met.