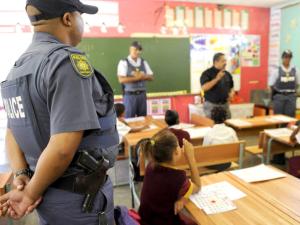 Cape Town – Gunshots rang out as pupils filed on to the grounds of Red River Primary School in Manenberg on Monday morning, even as police stepped up patrols at schools affected by gang violence.

Red River Primary was empty on Friday, when no pupils reported for class due to safety fears, and today half of pupils were absent, staff said.

“There were shots this morning, and it always stresses out the kids and the teachers,” said Shahieda Wilson, the Safe Schools officer at Red River.

“Kids who are running a little late no longer feel up to coming to class. The ones that are here stop concentrating and chat among one another. They worry, because they know they need to walk home through where the shooting is happening.”

After a meeting with teachers and the Western Cape Department of Education yesterday, police launched a two-week plan which has officers deployed to five schools.

This came after the Manenberg Teachers’ Steering Committee, of which the principals of the five schools are members, brought an urgent application before the court.

Earlier this month, a 17-year-old former pupil was stabbed at Silverstream Secondary. At Red River, a gunfight spilled over from the street on to school grounds last week because of a lack of fencing.

Lieutenant Ian Bennett, of the Manenberg police, said all schools in the area had been subject to police patrols in recent weeks. Principals at Edendale and Red River told the Cape Argus they were impressed with the visible policing on and around their grounds this morning.

“Yes, I do think that it makes a difference,” said Melvin Fourie, principal at Edendale.

“We understand that the police are short-staffed and under-resourced to deal with the escalation in gang violence. But when they are here and visible, they do deter violence from spreading over.”

Edendale falls on the border between the Americans and the Hard Livings gangs. The school draws pupils from both gang territories and often gang allegiances affect interactions among children as young as six, said Fourie.

Fourie has been principal at the school for 15 years but recent months have been the most violent and stressful of his tenure.

“It affects the entire fabric and functionality of the school. The stress, the absenteeism, the violence – it is very difficult to foster an environment conducive to learning under these circumstances,” he said.